This post focus on the second part of the route that goes from Lambeth Bridge to Tate Britain. The full route can be seen in photo gallery . 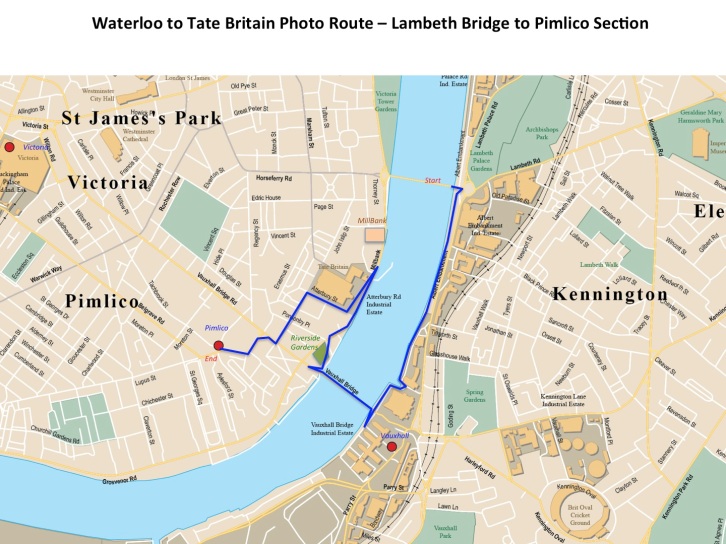 The start point is on Lambeth Bridge which is a good place to spend time exploring the area around the bridge as there are plenty of opportunities to take photos of the river, the House of Parliament or the surrounding area. The only problem with this walk is that it goes from north to south so the sun may be in your eyes unless you begin it early in the morning or later i the afternoon.

Its best to take the steps down to the Albert Embankment footpath by the river. The first building you pass is the International Maritime Organisation with its Seafarers memorial, followed by the FireBrigades Headquarters and the  White Heart Draw Dock’s boat Sculptures.

At Albert Embankment Garden the road bears to the left but there is a path that takes you along the riverside and then passed a slipway before ending up at Vauxhall Bridge. Go under the bridge and then investigate the area around St Georges Wharf before heading off onto the bridge. The walk across the bridge gives you good views of the surrounding area  but keep to the east side as you get to the end and go down the stairs to the Riverside Garden Walk where Henry Moore’s Sculpture resides. This is a good spot to rest and take in the scenery  before heading east up Millbank to Tate Britain. Before exploring Tate Britain, take a short  detour further along Millbank  towards Millbank Towers.

The last part of the route takes you to Pimlico underground station and starts at the side of  Tate Britain on Atterbury Road. which passed Chelsea College of art. . Turn left onto John Islip street which has building belonging to the Peabody Trust. At the end of the road take a dog leg across Vauxhall Bridge Road to Bessborough Street and Pimlico station.