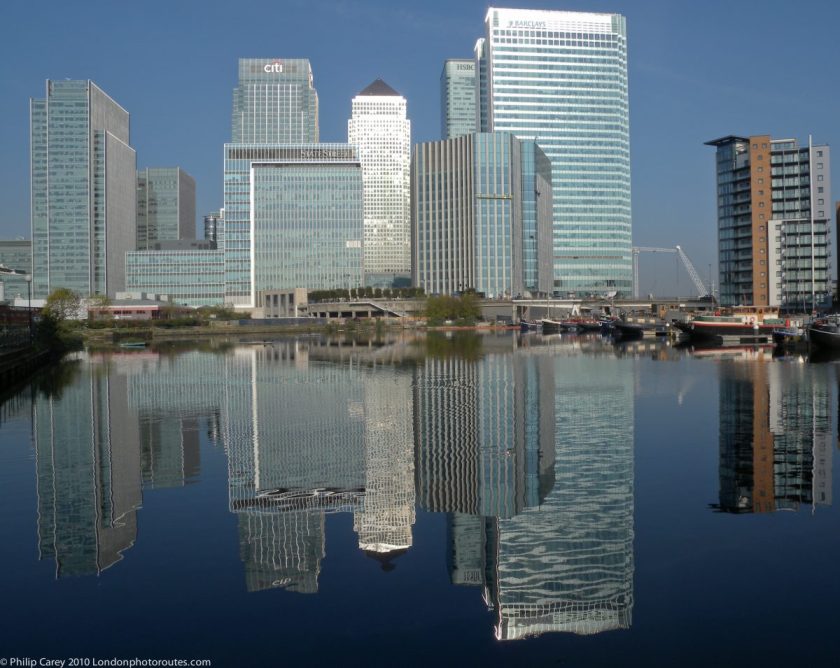 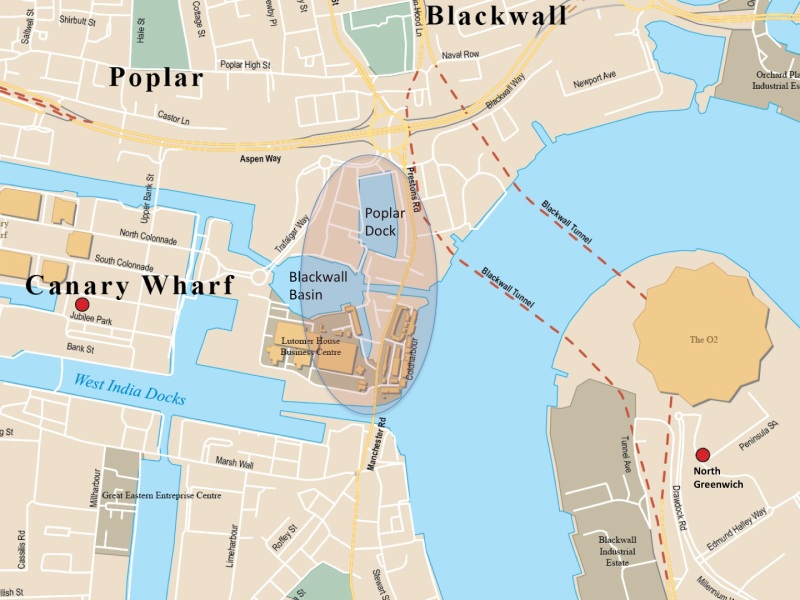 This is one of the many hidden places in this part of London that provide some spectacular views  of the buildings within the commercial sector of Docklands – often referred to as Canary Wharf.

Finding your way into Polar Dock can be difficult as it is quite well hidden with limited access from both Trafalgar Way and Preston Road – both coming off the Blackwall roundabout. The nearest station is Docklands DLR at Blackwall, via the underpass to the south side of the roundabout. The best times to visit is the early morning, as this is when the sun is on the buildings, and in the early evening when the buildings are starting to be lit up, and there is a chance of some ‘red skies following the sunset.

The docks were formerly part of the Port of London, at one time the world’s largest port. They have now been redeveloped principally for commercial and residential use. The name London Docklands was used for the first time in a government report on redevelopment plans in 1971 but has since become virtually universally adopted. It also created conflict between the new and old communities of the London Docklands.

Poplar Dock is a small dock in east London. It connects to the Blackwall Basin of the West India Docks and, although independent of this system, has never had a direct connection to the Thames.

Back in 1828, these docks and basins were originally built as a series of reservoirs for the West India Dock Company.  Poplar Dock was converted into a railway dock, in the days before any of London’s enclosed dock systems were connected to the railway network. The dock was built by the East & West India Docks and Birmingham Junction Railway Company, (later the North London Railway Company), and connected to the company’s goods yard at Chalk Farm by rail. It was the only docks to remain outside the control of the Port of London Authority and remained in the ownership of British Rail until its closure in 1981.

Because of its lack of a direct connection to the river, its operators needed the agreement of the owners of the West India Docks for uses which did not compete directly with their interests. In its early years, the dock was used mainly to import coal from the Northeast of England.

Much of the dock survives today as a mooring connected to Blackwall Basin. Poplar Dock is now known as Poplar Dock Marina. It was opened by Her Majesty the Queen in 1999. The marina is overlooked to the south by Landons Close (part of the Jamestown Harbour development) and to the west by Boardwalk Place.

The original docks consisted of an Import Dock of 30 acres (120,000 m2) of water, later named North Dock, and an Export Dock of 24 acres (97,000 m2), later named Middle Dock. Between them, the docks had a combined capability to berth over 600 vessels. Locks and basins at either end of the Docks connected them to the river Thames. These were known as Blackwall Basin and Limehouse Basin

Thought to have been named because of the Poplar trees that used to grow here when it was a marshy area.

This areas grew quickly in the early 1800’s with the opening of the East and West Docks and the new Commercial Road into London.

This was originally a small district by Blackwall Stairs and was known as Blackwall by at least the 14th century. This presumably derives from the colour of the river wall, constructed in the Middle Ages.

For over four hundred years, until 1987, Blackwall was a centre of shipbuilding and repairing.

Due to its location, Blackwall was also a place of arrival and departure – The Virginia settlers under Captain John Smith set sail from here in 1606 to found the first permanent settlers in North America.

These London Runs and Photo Routes are a great way of getting to know London, for seeing London’s best sights, and for photographing London.

By doing this London photo early in the morning, you can get to know London quickly and see it at its best – all for free.