Photographing the City of London does require you to take on an explorers attitude to hunt out the sites of Old London.

This is the part of London that is steeped in history and had been there the longest. it is also the type of environment that can bring out the ‘old London’ look to your photographs.

The Guildhall area main ‘attraction’ is the Guildhall which has been on the site from 1411, and has been rebuilt several times over the years with it present structure dating from 1957.

The streets and churches around the Guild hall are also worth a visit as they tend to have an interesting mix of the old and new.

More details of the area is shown below.

Guildhall is off Gresham and Basinghall streets, in the City of London wards and has been used as a town hall for several hundred years, and is still the ceremonial and administrative centre of the City of London and its Corporation. The term ‘Guildhall’ refers both to the whole building and to its main room, which is a medieval-style great hall.

The day-to-day administration of the City of London Corporation is now conducted from modern buildings immediately to the north of Guildhall, but Guildhall itself and the adjacent historic interiors are still used for official functions, and it is open to the public during the annual London Open House weekend. Guildhall Art Gallery was added to the complex in the 1990s. The Clockmakers’ Museum and Guildhall Library, a public reference library with specialist collections on London, which include material from the 11th century onwards, are also housed in the complex.

Two giants, Gog and Magog, are associated with Guildhall. Legend has it that the two giants were defeated by Brutus and chained to the gates of his palace on the site of Guildhall. Carvings of Gog and Magog are kept in Guildhall and 7 foot high wicker effigies of them donated by the Worshipful Company of Basketmakers in 2007 lead the procession in the annual Lord Mayor’s Show.

In 1431 Andrew Hunt bequeathed the Company buildings and land which are substantially the site of the present Hall.  Hunt’s buildings became the Company’s Hall, which was developed and improved over the years.  In common with many other livery halls, this building was destroyed in the Great Fire of 1666.  The replacement, built in 1681 at a cost of some £1,500, was destroyed by enemy action in 1940, and rebuilt in 1961

Girdlers were granted the right to regulate their trade in the City from 1327 and obtained a Royal Charter in 1449. Girdlers, or makers of belts and girdles, are no longer closely related to their original trade. Along with the products of many other Livery Companies, girdles have become of less importance than in mediæval times. However, the Company continues its long tradition as a charitable body

The Girdlers’ Company stands twenty-third in order of precedence of the 108 livery companies, and has an active livery of around 80

St Lawrence Jewry next Guildhall is the official church of the Lord Mayor of London and the City of London Corporation and stands in the Yard of the Guildhall.

The church was originally built in the twelfth century and dedicated to St Lawrence and was re-built by Sir Christopher Wren after the Great Fire of 1666. The church is also near the former medieval Jewish ghetto, which was centred on the street named Old Jewry.

St. Mary Aldermanbury was destroyed by the Great Fire of London in 1666. It was rebuilt by Sir Christopher Wren and was again gutted by the Blitz in 1940, leaving only the walls. In 1966 the remains of the church were shipped to Fulton, Missouri, USA, where the restored church now stands as a memorial to Winston Churchill’s ‘Iron Curtain’ speech made at Westminster College, Fulton, in 1946. The church and churchyard site was acquired by the City of London in 1970 and laid out as a public garden.

The gardens house a majestic bust of William Shakespeare – a memorial to his fellow actors Henry Condell and John Hemmings key figures in the printing of the first folio of Shakespeare’s works. Both are buried in the church. 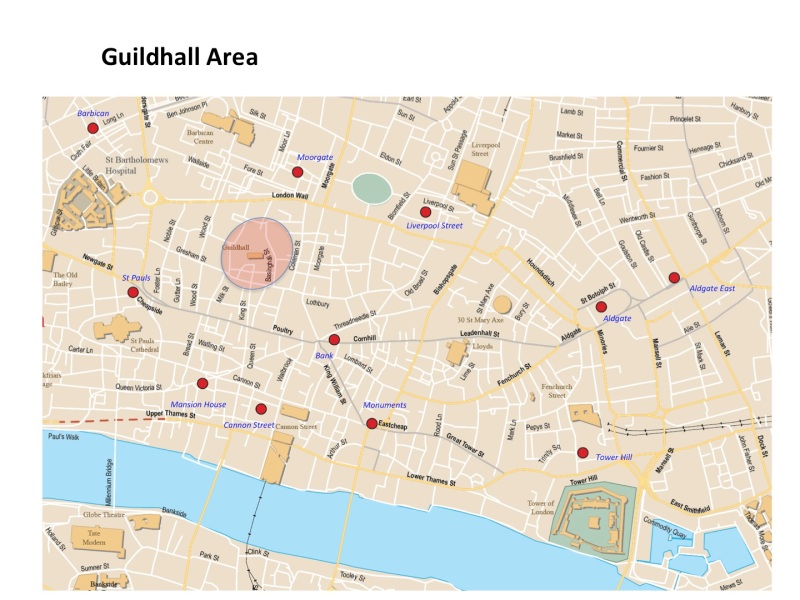