Southwark cathedral is also known as The Cathedral and Collegiate Church of St Saviour and St Mary Overie, It is the mother church of the Anglican Diocese of Southwark and has been a place of Christian worship for more than 1,000 years, however it only became a cathedral in 1905.

It is thought that a church existed here since the 7th century but In 1106 the church was ‘re-founded’ by two Norman knights as a priory, dedicated to St Mary and later known as St Mary Overy (‘over the river’). Like most of the surrounding area, Southwark was under the care of the bishops of Winchester, and much of the building’s future would depend on the goodwill of the bishops who lived in a palace just west of the church.

As part of the reformation in 1539, the building was surrendered to Henry VIII. By 1611,  the large unwieldy parish church served a very colourful area, not only of merchants and minor courtiers, but also actors, foreign craftsmen, and the ladies from the Bankside brothels.

By the mid 19th century, living and working condition in south London were intolerable. They were depicted by novelist Charles Dickens in distressing detail and by Charles Booth’s social researches with grim accuracy. It was proposed that a new diocese should be created and in anticipation for this a new nave was designed by Sir Arthur Blomfield in 1895.

St Saviour’s church became Southwark Cathedral in 1905. The diocese which it serves stretches from the Thames to Gatwick Airport, from Thamesmead in the east almost to Thames Ditton in the west. It has a population of two and a half million people, served by over 300 parishes.

In addition to holding five services a day all year round, the Cathedral provides services for diverse diocesan groups varying in size and style of worship. A cathedral derives its name from ‘cathedra’ a Greek word for the seat from which a bishop teaches and Southwark comes into its own as the bishop’s church when he ordains new priests and deacons, installs honorary canons and celebrates the Easter liturgy 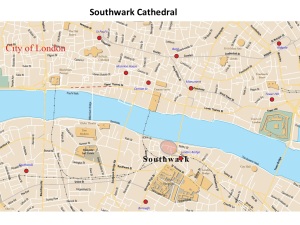